Spend some quality time in a holiday home in Æroskobing, Æro

Ærøskøbing is situated in the middle of the cosy and scenic island Ærø, south of Funen.

4 guests have granted an average assessment of 5,00 out of 5 possible stars.

I the idyllic Ærøskøbing, the best preserved market town from the 16th. century, you will find beautiful old and preserved houses, mediaeval alleys, hollyhocks, atriums, interesting shops, good restaurants and an evocative and well-attended marina. Ærø is about 30 km long and 8 km wide on the. Besides Ærøskøbing, the island contains the towns Marstal, which is the largest town on the island, and Søby, which is the smallest of the three. Furthermore, the island has more small communities and fishing hamlets. 4 different ferry routes can bring you to Ærø from Als, Funen and Langeland. Ærø is a lovely holiday destination at all times of the year. 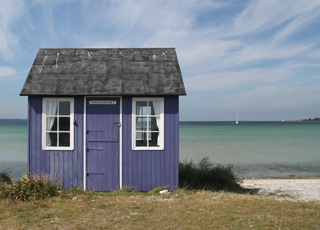 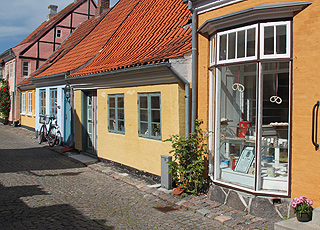 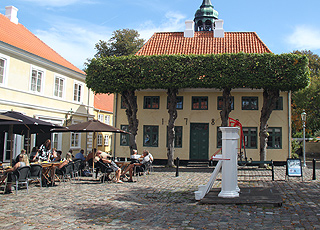 The beach 'Vesterstrand' by Ærøskøbing is a lovely bathing beach, which is also suitable for children. Don't miss the exceptional sunset from the small cosy beach huts on the beach. A number of good bathing beaches, which are suitable for children, are available along the shores of Ærø. The white sandy beach 'Erikshale Strand' is situated in the southern outskirts of Marstal. The beach has nice and clear bathing water and Blue Flag.

Ærø has a quiet unique nature with nice beaches, bays, coves, wetlands, fields, distinctive cliffs, undulating areas and forest areas. Towards the south Funen archipelago the coast is mild and level, but towards the Baltic, the stretch of coast is more undulating and characterized by steep slopes and cliffs. From the preserved cliff 'Voderup Klint' on the south coast, 7 km from Ærøskøbing, you can enjoy the magnificent view of the sea, and in clear weather it is possible to see all the way to the North German coast as well as to the entrance of the Flensburg inlet. It is possible to walk down to the beach from the cliff by way of a path. The cove 'Gråsten Nor', south-east of Ærøskøbing, is a large wetlands with a rich vegetation and bird life. The nature, surrounding the lighthouse 'Skjoldnæs Fyr' on the northernmost tip of Ærø is very beautiful, and here you will find lovely wetlands with many bird species Fields, level wetlands and lovely beaches surround Marstal.

The many bays and coves along the shores of Ærø provide anglers with optimal conditions for fishing. Especially recommendable fishing spots are f.x. 'Urehoved' by Ærøskøbing, 'Ærøs Hale' by Marstal, 'Drejet' west of Marstal, 'Voderup' towards south and 'Skjoldnæs' by the lighthouse on the northernmost tip of Ærø In Ærøskøbing you can bowl, ride on horseback as well as play petanque and minigolf. A number of walking and bicycle paths are available in the area. The bicycle routes no. 91 and 92 lead you through an interesting and scenic landscape. It is possible to rent bicycles in Ærøskøbing. It is very popular to sail in sea kayak as well as windsurf on the water outside Ærø.

The mill 'Ærøskøbing Bymølle' is a beautiful and restored windmill, which is situated in the outskirts of town. 'Ærø Museum' in Ærøskøbing is a regional museum, which shows a collection of antiquities from stone-age villages, exhibitions about shipping and much more. 'Hammerichs Hus' is established in the painter's own home from the 16th. century. A collection of antiques belongs to the exhibition. 'Flaske-Peters Samling' is a large collection of bottle ships, ship's models and paintings of ferries. Søbygaard is an old castle mounds with preserved structures from the Middle Ages and the Renaissance, which makes the place a national cultural heritage area. Many painters, ceramicists and other craftsmen live in Ærøskøbing or the neighbourhood. Pay a visit to their galleries, candle factories or other workshops. Visit some of the small original ports in f.x. Kleven and Strandbyen.

Marstal is the largest town on Ærø and it is situated right by the eastern end of the island, Erikshale. The old shipping town is cosy and charming with its narrow streets and alleys, the hollyhocks, the town life and the evocative marina. In the harbour of Marstal you can see and impressively long fieldstone pier and a lime kiln, which function as the landmark of the harbour. The shipping museum 'Søfartsmuseet' in Marstal consists of more than 30 exhibition rooms with objects from the history of the shipping. See i.a. more than 200 ship's models and more than 130 bottle ships (15 km). Søby is situated on the north-western tip of Ærø. The town is an old fishing town and with it's marina, the beautiful church, the mill 'Søby Mølle' from the year 1881 with the thatched roof as well as it's cosy atmosphere definitely worth a visit (15 km). The lighthouse 'Skjoldnæs Fyr' is situated in scenic nature by the wetlands with many bird species, at the northernmost tip of Ærø (20 km).