Spend some quality time in a holiday home in Dueodde

Dueodde on the south coast of Bornholm is a lovely holiday home area with lovely white and sandy beach as well as great holiday home in the forest behind the beach. Dueodde is famous for holiday home rental, and not without reason. Here you will find beach, scenic nature, undisturbed holiday homes and activities for the whole family.

105 guests have granted an average assessment of 4,50 out of 5 possible stars.

The calm and cosy holiday area Dueodde is situated in the forest, right behind the lovely sandy beach, which has a wooden slope and high dunes. In the dune area behind the beach lays the 45 metes high lighthouse Dueodde Fyr from the year 1960. The lighthouse is the highest in Scandinavia, and from the platform you have a fantastic view of the Baltic and the area. Snogebak, 5 km from Dueodde, offers good shopping possibilities. Dueodde is an attractive holiday spot in scenic surroundings, close to various leisure activities and sights for the whole family. Holiday home rental in Dueodde enables you to bring your dog along on your holiday in a holiday home. Your pet is welcome in many of our holiday homes here. 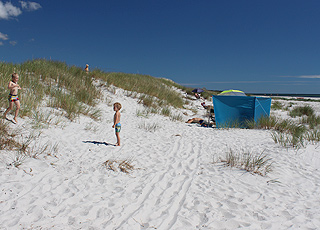 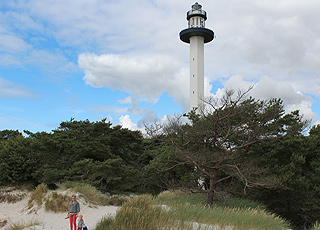 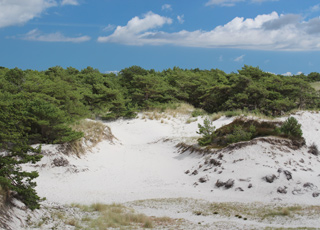 The Baltic beach by Dueodde is magnificent, wide and chalk-white. The beach is very suitable for children, as the water is shallow. The slightly shelving bottom has a number of sand bars and the water is clear. A large dune area with forest is situated right behind the beach, and from the forest a 600 metres long slope leads through the dunes and all the way out to the beach. The slope makes it possible to bring f.x. a bicycle, a wheel chair and a pushchair to the beach. Windsurfing is a very popular activity by the beach of Dueodde.

The nature, surrounding Dueodde, is characterized by lovely beach, pinewood, undulating terrain and dunes. At some places, the forest grows all the way out to the beach. Just west of Dueodde a plantation area with a varying nature and hilly landscapes is situated. 'Almindingen', east of Rønne and north of Åkirkeby, is the fifth largest forest in the country. It is a scenic and varying forest in a highland with i.a. ponds and small lakes. Here you will also find 'Rytterknægten', the highest point in the island (162 m). At the top of the hill a monument in the shape of a stone tower has been erected. 'Paradisbakkerne' by Nexø is an undulating rock landscape with a number of walking paths. Experience the rift valleys, the heathery raised bogs, the boulders and the peculiar vegetation of the area. By 'Helliddomsklipperne' between Gudhjem and Allinge steps lead you down through a deep gorge. Rugged rock formations in the water create dramatic sceneries.

Play golf during your holiday in a holiday home in Dueodde. The island has 3 golf courses, from which the course by Dueodde Golfklub is the closest. Many good nature experiences await you along the 250 kilometres good bicycle roads, from which the majority are traffic-free. A number of walking paths are also available in the distinctive nature. It is popular to play beach volley and surf by the beach of Dueodde. Anglers have good possibilities for a haul by the shore as well as in the lakes and streams of the island. If you fancy rock climbing or bird observation, Bornholm is also an ideal holiday destination, when you spend your holiday in a holiday home.

The 45 m high white 'Dueodde Fyr' from the year 1960 is the highest lighthouse in Scandinavia, and from the platform you have a fantastic view of the Baltic and the area. Many craftsmen inhabit the island, and more places it is possible to visit the sculptors, the glassblowers, the ceramicist and the painters. The idyllic fishing hamlet Snogebæk, just a few km from Dueodde, contains a glass factory and a smokehouse. During your stay in Bornholm, you ought to experience the characteristic smokehouses of the island. One of the most characteristic smokehouses in Bornholm is 'Hasle Silderøgeri', which is a famous museum-smokehouse, where fish are still smoked according to the old and traditional method in open chimneys. The round churches are the landmarks of Bornholm. The characteristic and whitewashed churches, which are more than 800 years old, have served as defence, storage of supplies and as church houses. The 4 most famous churches are: Østerlars, Olsker, Nylars and Nyker.

Hammershus is an impressive old castle from around the year 1250, which rises from a steep rock hillock on the northern tip of Bornholm. Hammershus is the largest castle ruin in Northern Europe. 'JOBOLAND Brændesgårdshaven' in Svaneke is a former farm, but today a popular nature and amusement park with a unique profusion of flowers and numerous attractions. 'Oluf Høst Museum' in Gudhjem is an art museum, where the painter¿s life is carried on in his own home. At the art museum 'Bornholms Kunstmuseum' works of famous Bornholm painters as well as theme exhibitions with art, design and handicraft can be observed. 'NaturBornholm' in Åkirkeby informs of the nature of Bornholm - right from the origination in the glowing lava 1.7 billion years ago. 'Bornholms Middelaldercenter' in Gudhjem is a historic experience centre with a live environment from the Middle Ages (the period 1350-1450) with people, animals, houses, water mills and a fortified castle mounds.