Spend some quality time in a holiday home in Arnager

Arnager is a small, quiet and very cosy fishing hamlet on the south coast of Bornholm.

4 guests have granted an average assessment of 4,75 out of 5 possible stars.

Arnager has a characteristic island harbour, which is connected with the mainland through a 200 metres long wooden bridge. The evocative town offers a herring smokehouse, a restaurant as well as a gallery, which has been established in an old farm in the middle of town. It is possible to buy groceries in the area, i.a. by Nylars, 4 km towards north. Furthermore, you will find good shopping possibilities, restaurants, cultural offers and leisure activities for the whole family in Rønne, 9 km towards north-west. 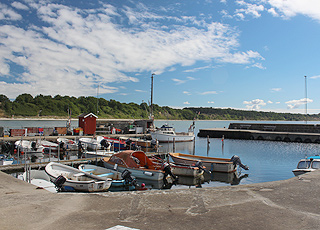 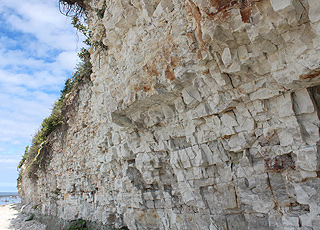 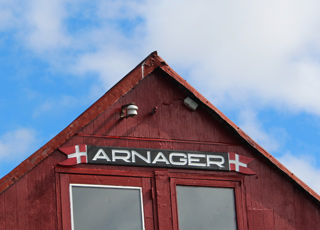 The beach of Arnager is a lovely sandy beach, which starts by the island harbour. 11 km towards east you will find the beach 'Boderne Strand', which is a long and narrow beach. The water quickly gets deep here. The sandy beach 'Galløkken Strand' is situated just south of Rønne and 6 km west of Arnager. The first 10-15 metres of the bottom are sandy, and after that the bottom is stony. The access to the beach from the parking ground is steep. The wide, fine and white sandy beaches are available by Balka and Dueodde, about 23 km towards east. The beaches have shallow and clear water, sandy bottoms and they are very suitable for children.

The nature, surrounding Arnager is characterized by beach, sea, hills, forest and meadow. In the middle of Bornholm one of the most beautiful forests of the country, Almindingen, is situated. Different marked routes lead you through the forest, where you can experience the 162 metres high hill 'Rytterknægten', beautiful forest lakes and the largest rift valley of the island. 'Paradisbakkerne' by Nexø is an undulating rock landscape with a number of walking paths. Experience the rift valleys, the heathery raised bogs, the boulders and the peculiar vegetation of the area (8 km). On the northern part of the island, by the fabulous nature area 'Hammerknuden', the scenic rocky coast, the rift valleys, the waterfalls and the rocky caves will impress you. Caves and rugged cliff formations in the water create dramatic sceneries by the cliffs 'Helligdomsklipperne' close to Gudhjem.

Anglers will find good fishing possibilities by the point 'Arnager Pynt', all along the shores as well as in the Put & Take fishponds of the island. Golf players can try out no less than 3 courses on the island. The club 'Bornholms Golf Klub' in Rønne is the closest, but the courses of 'Nexø Golf Klub' and 'Nordbornholms Golf Klub' are also recommendable. The many marked walking, bicycle and bridle paths of the island enable you to experience the scenic and distinguished nature landscape at close range.

By Arnager you will find a small passage grave from the later stone age. Visit Rønne and experience the cosy atmosphere of the marina. The town also offers museums, a bowling alley, a swimming baths, good shopping possibilities and restaurants. 'Hjorts Fabrik' is the pottery museum of Bornholm. 'Erichsens Gård' is the town and garden museum of Bornholm. 'Bornholms Museum' shows an archaeological collection with 2,000 golden gaffers, church inventory, grandfather clocks and much more (9 km). 'NaturBornholm' in Åkirkeby informs of the nature of Bornholm - right from the origination in the glowing lava 1.7 billion years ago (21 km). The round, whitewashed churches are the landmarks of Bornholm. The 4 most famous churches are: Østerlars, Olsker, Nylars and Nyker, and they are more than 800 years old.

At the art museum 'Bornholms Kunstmuseum' (by Helligdomsklipperne) works of famous Bornholm painters as well as theme exhibitions with art, design and handicraft can be observed (28 km). Melstedgård by Gudhjem is an animated agricultural museum with houses, fields and stables (28 km). Hammershus is an impressive old castle from around the year 1250, which rises from a steep rock hillock on the northern tip of Bornholm. Hammershus is the largest castle ruin in Northern Europe (33 km). 'Oluf Høst Museum' in Gudhjem is an art museum, where the painter¿s life is carried on in his own home (33 km). 'Bornholms Middelaldercenter' in Gudhjem is a historic experience centre. The live environment from the Middle Ages (the period 1350-1450) contains living-quarters, a water mill, a forge and a fortified castle mounds. 'JOBOLAND Brændesgårdshaven' in Svaneke is a former farm, but today a popular nature and amusement park with a unique profusion of flowers and numerous attractions (34 km).